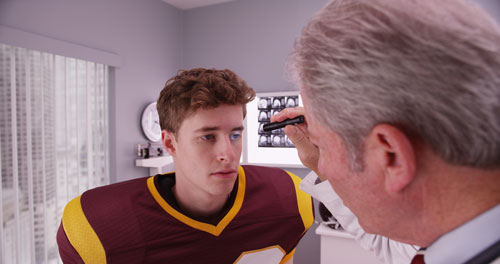 Dr. Tyler Page works with many local youth athletic teams. He specifically focuses on concussion prevention in youth sports. Concussions have become an increasingly prevalent topic in the media with regards to the long-term effects and impacts, particularly among young athletes. Dr. Page is passionate about this because as a young hockey player, he suffered from a concussion after one too many head injuries. He now works with local teams to prevent concussions before they happen.

Working with local sports leagues, Dr. Page focuses on education. This includes educating the coaches and parents, as well as the athletes themselves. Tyler Page shares that “A concussion doesn’t always look like that vicious hit you see in the NFL. It can be a quick jerk of your head or your head hitting the turf. Sometimes the person doing the hitting can actually sustain the concussion.”

In the last three years, dozens of youth concussion clinics have opened in more than 30 states. Connecticut and Rhode Island have both passed laws in recent years requiring school-age athletes who have sustained a concussion to have written authorization from a medical professional before they can return to their sport. There are also new guidelines encouraging players to be removed from games even if there is only a suspicion that there has been a head injury.

With the increase in awareness around the seriousness of head injuries, Dr. Page is committed to educating young athletes and preventing the concussions before they happen.

Take the first step and schedule a concussion screening and baseline test for your child today.

Dr. Tyler Page is an award winning chiropractor with a focus on rehabilitation and prevention.