ITBS symptoms range from a stinging sensation just above the knee joint to swelling or thickening of the tissue in the area where the band moves over the femur. The stinging sensation just above the knee joint is felt on the outside of the knee or along the entire length of the iliotibial band. Pain may not occur immediately during activity but may intensify over time. Pain is most commonly felt when the foot strikes the ground, and pain might persist after activity. 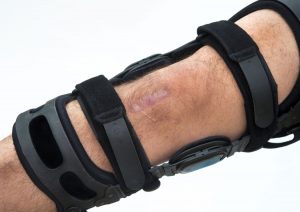 Correct diagnosis of the cause of pain or discomfort is necessary in order to choose the most appropriate treatment. Compartment syndrome may require immediate medical intervention, depending on the severity of the condition. Stress fractures require rest until the bone has healed. If needed apply ice to the injured area. The inflammation of soft tissue known as shin splints can be initially treated with rest, ice to reduce inflammation, NSAIDS, and physiotherapy. For healing, rest may be required for a couple of weeks or up to three months for severe cases. Crutches may be necessary for temporary non-weight bearing, casting of the limb is only recommended for severe cases. Patients may be advised to decrease the duration or intensity of their exercise and then build it up slowly, as well as to exercise caution on high impact surfaces, until the muscles re-condition. Specially fitted footwear or an orthotic may be used to prevent a reoccurrence of shin splints.

Pain at the front or inner side of the knee is common in both young adults and those of more advanced years, especially when engaging in soccer, basketball, horseback riding, volleyball, running, figure skating, snowboarding, skateboarding, and even swimming.

With an injury to the piriformis muscle, which often includes the sciatic nerve as well, there is a radiating pain in the gluteal region that extends into the lower leg. This is a common injury for anyone who sits for long periods of time, as with many workplaces, and is also common in repetitive running sports like cross country. Dry needling and other myofascial releases are effective treatments, as is chiropractic alignment of the pelvic and hip complex, followed by a protocol of glute stretching and strengthening.

Often referred to as “growing pains,” this includes pain in the anterior portion of the knee. It is very common in adolescence and among youth athletes like soccer players. It typically occurs in the early teenage years as the athlete or individual is growing and participating in activities. Treatment includes pain-controlling modalities like kinesiotaping and bracing, along with in-office and at-home care measures like stretching and strengthening exercises.

Dr. Tyler Page is an award winning chiropractor with a focus on rehabilitation and prevention.